The store will not work correctly in the case when cookies are disabled.
Part # : 37WGA3

Skip to the end of the images gallery 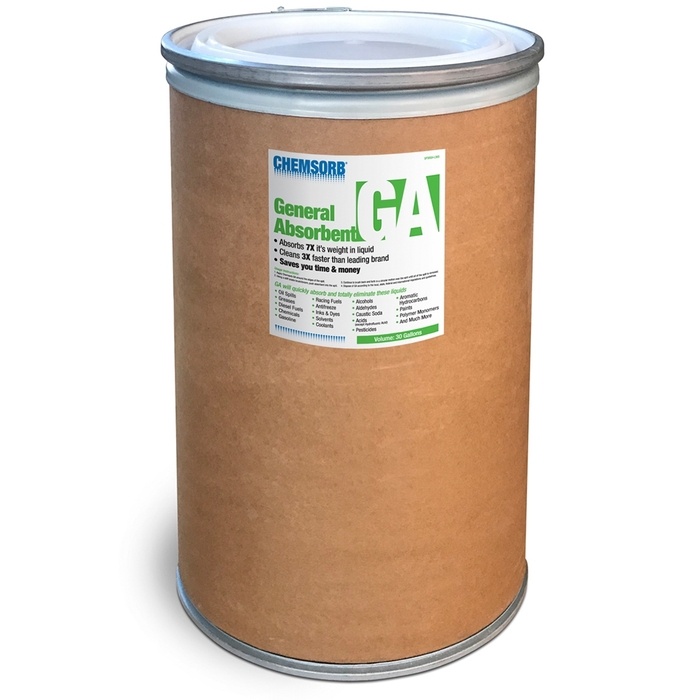 Skip to the beginning of the images gallery
Part # : 37WGA3

General Absorbent that absorbs 7X it's weight in liquid

Specifications
CHEMSORB® GA (General Absorbent) is the leading lightweight, fast-acting absorbent formulated to quickly clean up any liquid or semi-solid spill including: oil, grease, diesel fuel, gasoline, aviation fuel, chemicals, antifreeze, inks & dyes, solvents, coolants, pesticides, alcohols, aldehydes, caustic soda, aromatic hydrocarbons, paints, polymer monomers, acids (except Hydrofluoric Acid), and much more. Based on all natural perlite, this product is enhanced with a proprietary de-dusting technology which facilitates ease of use and fast absorption. CHEMSORB will absorb 7 times more liquid than the leading clay brands and do it 3 times faster. When CHEMSORB is swept up, the floor is left clean and dry, leaving a cleaner environment. CHEMSORB meets all OSHA and EPA standards, it is silica free and USDA approved for use in food processing facilities. CHEMSORB will absorb more liquid and use less product to do it than other brands. Which means we can reduce your disposal cost (in weight) by 5 times the leading clay brand. CHEMSORB will save you time, money and leave a cleaner environment.

This information has been provided as a general guide. It is the customer's responsibility to select the proper container for product and application compatibility. The Cary Company does hereby disclaim any and all warranties, expressed or implied, including any implied warranty of merchantability or fitness for a particular purpose or use. We are not responsible for consequential damages arising from customer's selection and use of containers, container and label dimensions, and/or closures supplied by us.

Q & A
Customer Questions
No Questions
Did you find what you were looking for?
Videos